Ranger doesn’t have “rotations”, as all their PAs are situational and depends on what you’re fighting.

End Attract | Positron Blast destroys any bosses with multiple hitboxes like Dark Falz Elder, but does absolutely horrid damage against smaller enemies, which is where single target PAs like

Impact Slider shines better. For the most part, experiment! Some PAs work better in the right situations, but you need to recognize where and when those scenarios occur.

A general rule of thumb:

Note that these are only suggestions, you are encouraged to try out all the Ranger Photon Arts (PAs).

Type-0 refers to crafting PA disks accessible through the My Room terminal, which can be done at any level: 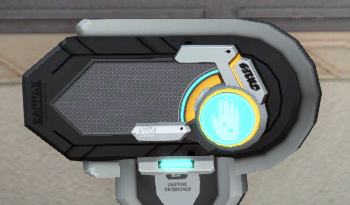 For a detailed numbers breakdown on Photon Arts, here’s a chart courtesy of Spin Cycle and acep.

Your main boss killer, used to burst down bosses as it hits numerous times. Has 2 charge levels. Needs 3+ ticks to land for it to beat most options.

A gap-closer that’s highly spammable and deals surprisingly good damage; the ending kick should be canceled immediately as it deals pitiful damage.

Fast filler DPS on stationary targets when you’re 2+ dive rolls away; must be used in the air for best effect.

Your main AoE PA, demolishes anything caught within its huge blast radius.

Used to keep dangerous targets hit-stunned; highly spammable at close range and aimed at the ground.

Clears lines of enemies, mostly used as a last resort on bosses.

Gearing up for those wanting to skip the PA section.

For reference, this is what I use on my weapon palettes: 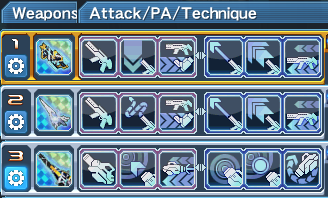